Pollen, nosema and the case of three missing queens

This Saturday Tom ran a nosema IDing demo at the apiary. He had a microscope attached to his laptop so that he could show us what he was seeing on the screen and even take photos. After finding zero nosema in two samples, including one from a small colony that was being slow to build up, he finally hit the jackpot in a third sample and was able to show us the small rice-like cells of nosema.

Above you can see Tom diligently removing the heads, as just the abdomens are needed for the sample. The abdomens are then ground up using a pestle and mortar and placed on a slide with a drop of water. The water makes the nosema cells appear to swim but that is just the movement of the water on the slide!

Nosema apis and Nosema ceranae are extremely common spore-producing fungus parasites that live inside a honey bee’s gut. Nosema spores enter via the mouth parts of a bee as she feeds or cleans and travel into her mid-gut, where they invade her digestive cells. The spores germinate and feed happily away on the content of these cells, rapidly multiplying by cell division until the gut contains 30-50 million nosema spores once the infection is fully developed. As you might expect, this significantly shortens the bee’s lifespan (sources disagree on how much, with various books/websites quoting 50%, 10-50% and up to 78% – the earlier the bee picks up the spores, the more dramatically its lifespan is likely to be shortened). 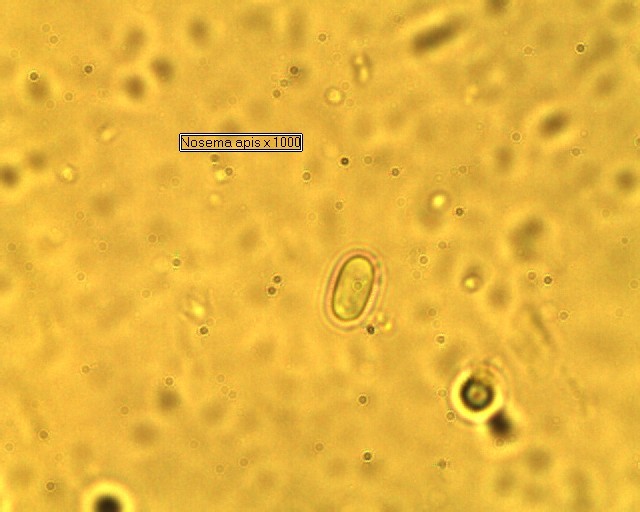 Tom checking out a sample.

As well as spotting nosema Tom also found a bee hair – isn’t it beautiful? It reminded us of a tree.

And lots of pollen. I wanted to try and ID the pollens using a book I own – or at least I used to own – but now I can’t find it. It was ‘The pollen grain drawings of Dorothy Hodges’ (IBRA, 2009), which I used to draw the pollens in my 2015 post ‘An evening spent peering at sexual material‘. Perhaps I lent it to someone, or maybe I’ll discover it hiding somewhere. Anyway, if any palynologists out there can identify these, that would be great. Is the small round one forget-me-not?

EDIT: Biologist and fantastic blogger Standingoutinmyfield has commented “Unfortunately, most of those pollen grains are damaged, so will be impossible to identify. This can happen when the osmotic balance of the solution is too high or low…probably if you used pure water, the pollen grains swelled until they exploded. However, I can tell you forget me not pollen is the smallest pollen known to man, at just 2 microns. It’s not round, though, it’s shaped like little dumbbells.” 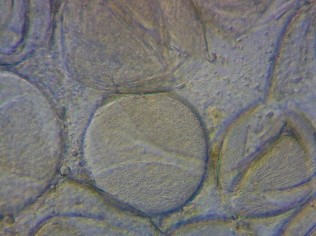 As for the three missing queens, well unfortunately Emma and I appear to have mislaid them. We did a split on Hope’s hive on Saturday 6th May as it contained queen cells, but it’s possible the colony had already swarmed as the cells were sealed and there was no sign of Hope herself.  Emma also donated some queen cells from Hope’s hive to our other hive, Patience, as there was no sign of Queen Patience and the colony was grumpy.

When we checked on Sunday 14th May, the queen cells were hatched but there was no sign of any eggs yet – probably too early. That was still the case when I visited on Saturday 20th May. So we wait, and hope, for eggs. The virgin queens must successfully mate in the sky and return safely to their hives. It is a perilous and weather-dependent business. We have had a lot of cold days and some rain lately but I have my fingers crossed that surely at least one colony will reward us with a laying queen soon!

I’ll end with some photos of bees and birthday cakes – it was my birthday recently. It happens to be May 20th; the Slovenians are my new favourite nation as they have named May 20th World Bee Day. What better present could a beekeeper ask for?! 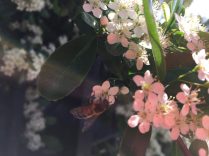 I am a UK beekeeper who has recently moved from London to windswept, wet Cornwall. I first started keeping bees in the Ealing Beekeepers Association’s local apiary in 2008, when I created this blog as a record for myself of my various beekeeping related disasters and - hopefully! - future successes.
View all posts by Emily Scott →
This entry was posted in Uncategorized and tagged nosema, pollen, Thomas Bickerdike. Bookmark the permalink.

10 Responses to Pollen, nosema and the case of three missing queens