Ron is the author of the excellent Bad Beekeeping blog, which has recently been selected by Beesker as “the world’s very best website on bees and beekeeping”.

Bad Beekeeping is no ordinary beekeeping book. Instead it’s a memoir of Ron’s time as a commercial beekeeper, spending his summers in Canada, winters in the US and endless time driving between the two. He has an impressive memory, supplemented by photos and diaries from the time, which really brings the reader along with his journey.

I knew there was a huge chasm between being a hobby and a commercial beekeeper, but Ron’s book really rammed that home. Commercial beekeeping as Ron did it sounds incredibly hard. In my household, we know how much money will come in each month. Unless the worst happens and we both lose our jobs, it’s a reliable, stable figure. So too are our expenses. But when Ron was a commercial beekeeper, he was living on a financial knife edge. An almost infinite amount of factors could affect his income and expenses – bee diseases, weather, honey prices, even government border control policy. You might well ponder why our society puts so little value on the work of the people who provide our food. 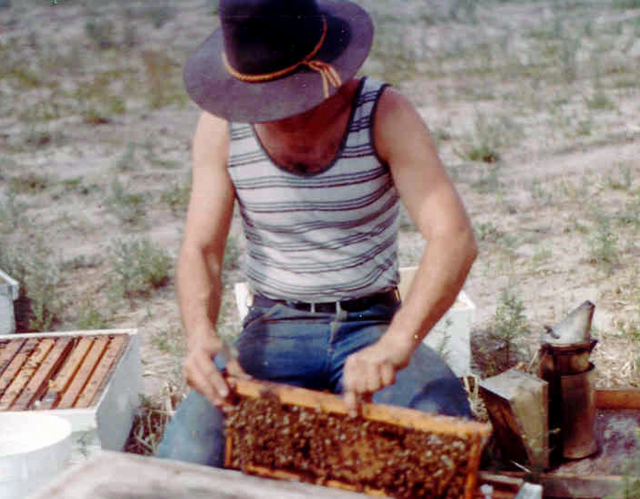 Not only that, but the summer working hours are endless. Hot, sweaty hard labour with the bees and dangerous amounts of time spent driving hives through the night from one state or even one country to another. If you think your job is tough, you should read this book. There are some amusing stories along the way too. I enjoyed the one about Ron spending an hour late on one Friday afternoon trying to find a renegade queen, only for his beekeeper brother David to drop by and tell him her majesty was sitting on Ron’s hat.

Once you’ve read the book, you might wonder why Ron or indeed anyone does commercial beekeeping. But I think all of us beekeepers have an idea deep down. It’s something to do with the smell of the hives on a summer’s day, all sweet and heady from the nectar flowing in. Something to do with the humming of the bees and the feel of their feet on your hands. If you have the bee bug, you understand.

It takes a little while to get used to the gentle pace, meandering storyline and sheer amount of detail contained in Bad Beekeeping, but I found myself sucked in by its charms. Ron meets a lot of characters in Saskatchewan, his part of rural Canada, and you find yourself rooting for him as he desperately tries to make money from honey.

I am a UK beekeeper who has recently moved from London to windswept, wet Cornwall. I first started keeping bees in the Ealing Beekeepers Association’s local apiary in 2008, when I created this blog as a record for myself of my various beekeeping related disasters and - hopefully! - future successes.
View all posts by Emily Scott →
This entry was posted in Uncategorized and tagged book-review. Bookmark the permalink.