How I came to have bees again

This weekend I was still beeless, as there has been an outbreak of American Foul Brood (AFB) in my supplier’s area and movement of bees and hives has been suspended. “Let me know if any swarms come your way”, I said to my in-laws on Sunday.

On Monday evening, just before I started putting Tommy to bed, I got an unexpected call from Tom, my father-in-law. “We have a swarm!” he said. Can you believe it? The bees came to us. 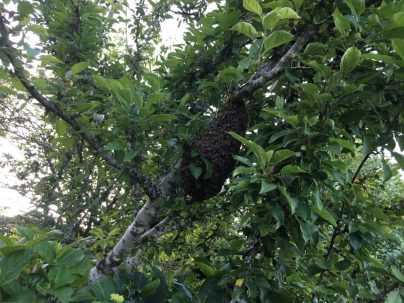 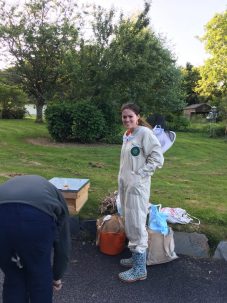 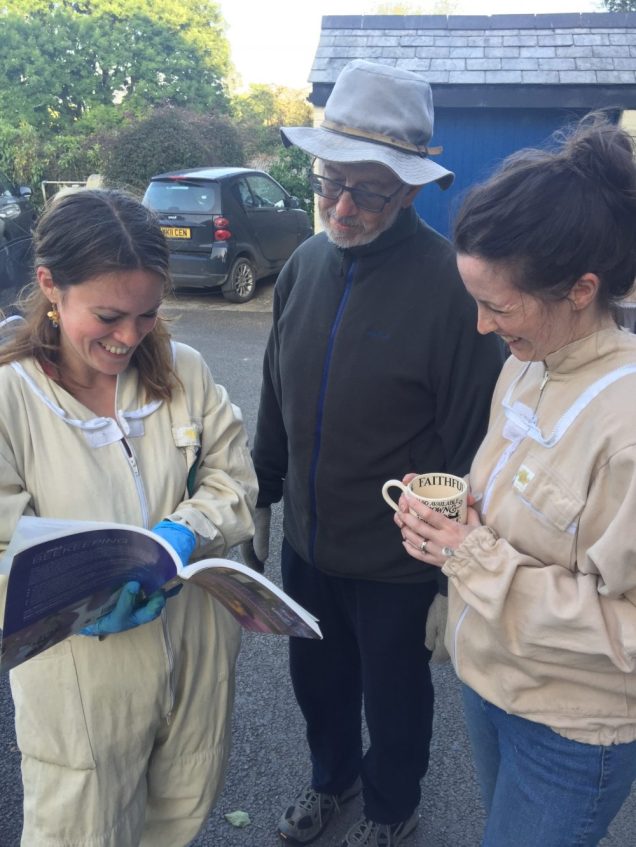 Reading the theory of what should happen

Carol, my mother-in-law, kindly babysat Tommy while Tom and I went to collect the swarm. The bees had been kind on me and conveniently landed on a low-down apple tree branch, about six feet up. Even a shortie like me could reach them with a stepladder. My sister-in-law, Oni, and brother-in-law, Alan, were also on hand. As Oni is a similar size to me she got my spare bee suit and assisted me with the swarm collection. Al happens to be a multi-award winning documentary-style wedding photographer (alanlawphotography.co.uk and thisisreportage.com), so he came in handy to take photos! A joint family effort.

I was excited but also a little nervous as I’ve never collected a swarm before. I’ve read lots about it, and heard talks about it, but that’s not quite the same is it? My plan was to collect them straight into my spare hive, as I didn’t have a nuc or skep ready. This made it a two-person job, as you can’t hold up a National hive with one hand. Although she has never done beekeeping before, Oni was very brave and held the hive steady for me under the swarm.

The swarm was hanging just above me in the evening light, settled down for the night. Away from home, on an adventure, with just each other in the world. They buzzed lightly and contentedly, a few circling the swarm but most clinging together in a perfect mass. Balancing on the stepladder, I counted ‘One, two, three!’ and proceeded to shake the apple tree branch.

Nothing happened. I shook it more vigorously, again and again. The swarm swayed, but held firm together. It would take more than my shaking to shift them. I had read in my books that you could try holding the skep or nuc box above them, as bees like to enter dark cavities. But I imagined that might take some time, the hive was heavy, and it was already gone 8pm. I decided I would need to move the bees in myself.

I stuck my hand into the swarm. Trying my best to be gentle, I used my hand to shake them loose into the hive box Oni was holding up for me. They were soft, warm, and miraculously put up with me doing this. Swarms fill up on honey before they leave, so as long as they still have plenty of honey in their stomachs they are usually good-tempered. Once I had a fair number in, I got Oni to put the box down on the ground. 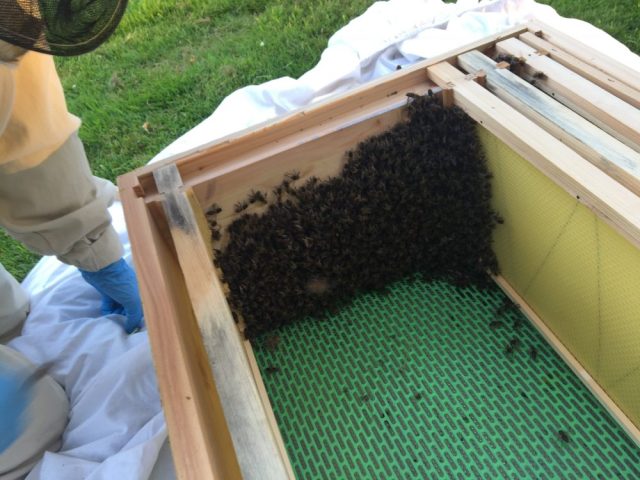 The colony stayed in the hive, lifted their abdomens and started to fan their wings, which told me that the queen was with them. Raising their abdomen exposes their Nasonov gland, releasing the attractive Nasonov pheromone to draw the rest of the swarm home. “Here we are!” the pheromone says. Meanwhile I used a empty feeder to scoop up more and more of the bees from the branch. Eventually only a hard-core group of irritable bees remained up on the tree, their indignant buzzing indicating their displeasure at their queen suddenly going missing. They clung desperately to the branch, which must have smelled like home to them, having being scented by their queen and fellow bees.

It was growing dark, so we positioned the hive in a corner of Tom and Carol’s garden and Tom dropped me back home. Today Tom collected the last few stubborn stragglers from the tree and put them in the hive with their sisters. I hope they are happy in their new home, and that all my readers have swarms coming their way too – if you want them, that is. 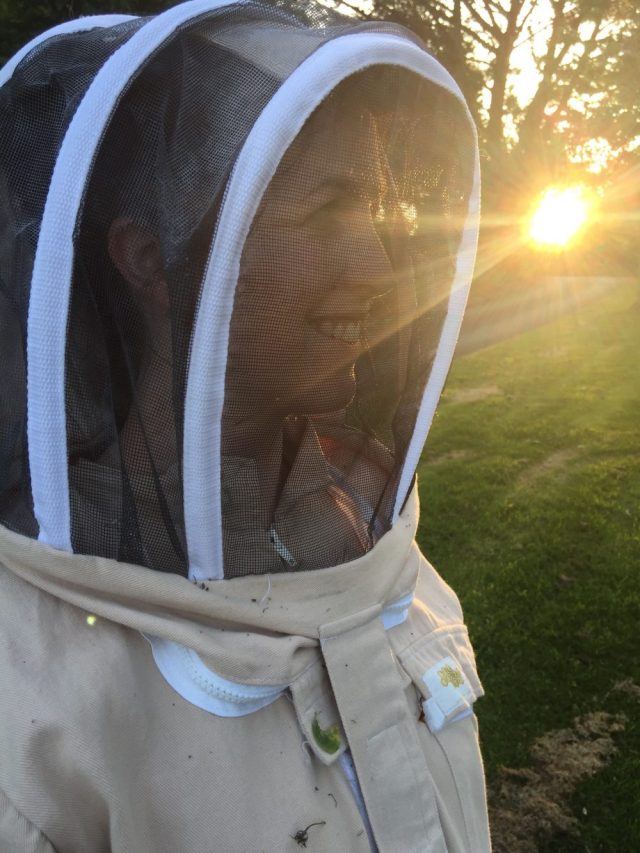 Oni in a bee suit, photo by Alan Law

I am a UK beekeeper who has recently moved from London to windswept, wet Cornwall. I first started keeping bees in the Ealing Beekeepers Association’s local apiary in 2008, when I created this blog as a record for myself of my various beekeeping related disasters and - hopefully! - future successes.
View all posts by Emily Scott →
This entry was posted in Swarms, Uncategorized and tagged swarming. Bookmark the permalink.

42 Responses to How I came to have bees again