This weekend I went to Bee Health Day 2018, a day with local Cornish and Devon Bee inspectors learning about various diseases and pests. Accompanied by tea and pasties, so that you knew you were in Cornwall.

We had four sessions – one on the Asian hornet, one on varroa, a practical apiary visit and one looking at real-life frames containing various nasty brood diseases. I know you’re all jealous.

We were reminded that the reason brood comb turns increasingly brown to black over the years is that it contains poo. Not adult bee poo, but larva poo. They have nowhere else to go, so they poo in the comb. And any diseases the larvae or adults might have stay in the comb too – nosema, EFB, AFB, it will all stay in there. In the wild bee colonies would naturally die out after something like 4-5 years, wax moths would move in, and the old comb would be consumed by the moths. It’s not natural or hygienic to keep on using brood combs indefinitely.

To prevent cross-contamination from old combs, combs should be changed all at once through a Bailey comb-change, artificial swarm or shook-swarm method, rather than just replacing one or two a year.

During the Asian hornet session we were given the tip to get a fishing net. If you think you have an Asian hornet visiting your hives, scoop it over the top, bring it down to the ground and carefully get it into a box and then your freezer. If you can’t catch one, get a photo. Stamping on one will temporarily stun it but not kill it – they are tough little buggers. 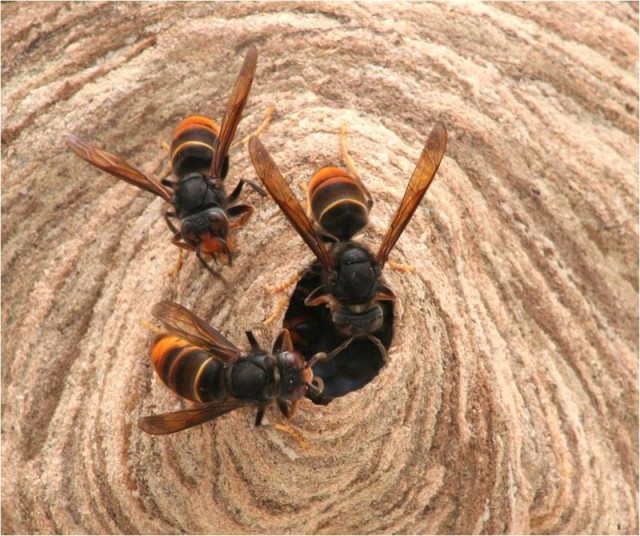 It is likely to be September when a nest is next discovered in this country, as that is when most previous sightings have occurred. They’re also more likely to be seen around your hives on a wet day, when there are fewer flying insects so the hornets turn to honey bees as a reliable source of food.

If you spot a hornet or hornet nest which you suspect may be the Asian hornet, then notify the Non-native Species Secretariat (NNSS) immediately using their online monitoring form. NNSS Identification sheets for the Asian hornet are available. Our harmless native hornet looks like a larger version of a yellow wasp, whereas the Asian hornet is mostly black apart from a yellow band flashed across their fourth abdominal segment, complemented by yellow legs and a bright orange face. In flight they look like black cigars.

The bee inspectors did not sound optimistic that we can hold back the hornets forever. The hornets have no natural predators in France, so have rapidly grown in numbers there. They are bad news not just for honey bees but for all sorts of native insects.

Rather than using the same treatments year after year (something I’m guilty of! I’m an Apiguard fan) rotate your treatments regularly to avoid mites developing resistance to any one treatment. There are some relatively new ones on the market at the moment (see the Beebase Managing Varroa leaflet for a list).

A mix of husbandry methods  – for example drone brood removal, artificial swarm, shook swarm, comb trapping – and chemical methods can be used. MAQs is one of the few which can safely be used when honey is still on the hive, but its instructions must be followed to the letter as it is powerful stuff. We were told Apitraz is popular with commercial bee farmers in this country.

My favourite part of the day, as we got to get off our bums and play about with bees. We used a local Association apiary, which the Bee Inspectors found disappointingly lacking in any diseases. They couldn’t even find any varroa to show us, not even after raking through the drone brood!

The bees were ‘teasy‘ as someone said, as it was a wet day and they’d been opened up twice already by the time our group went to see them. Despite this I enjoyed seeing the Bee Inspector go through the hive, we found a queen cell and he told us how he would deal with it (spoiler – not by automatically destroying any queen cell you find!) and explained a good method of doing an artificial swarm and culling some varroa while you’re at it.

I asked the inspector how having foundationless frames might affect varroa levels, as when they are left to their own devices to make comb, the bees will make more drones than they would in a hive filled with standard worker brood size foundation. As varroa mites prefer reproducing in drone brood, would the extra drones mean extra varroa, or counter-intituively might the extra drones be beneficial because the varroa could go into the many drone cells around and leave more of the worker larvae alone? The inspector said it was a good question but he didn’t know the answer. Does anyone have an opinion on that? 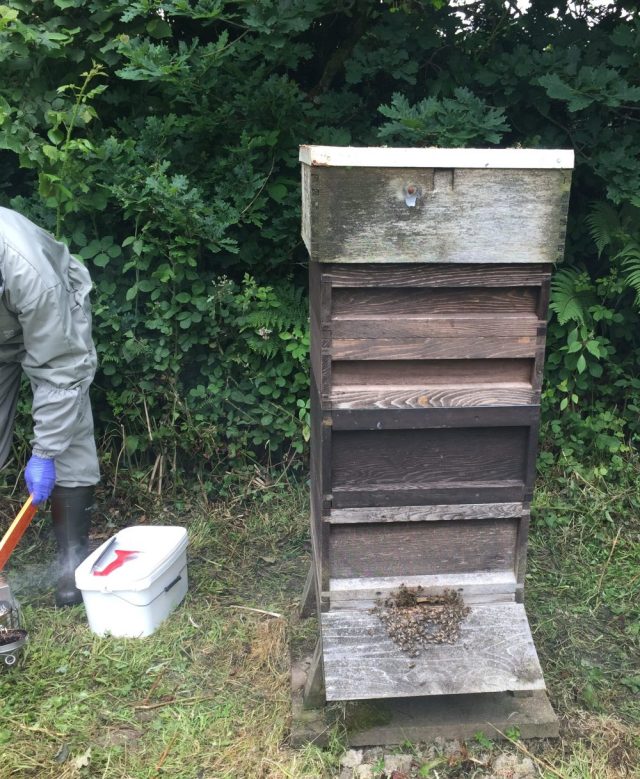 The hive we inspected for the practical session. Three supers high.

Before going into the room containing samples of American Foul Brood (AFB), European Foul Brood (EFB), chalk brood, sacbrood and various hive pests we were handed plastic aprons and gloves. We had to leave any bags and coats outside the room. Inside we were given a little paper quiz to try and identify what was in each frame, which was a clever way of getting us really looking.

Earlier in the day we were warned to isolate any swarms we catch and monitor them for signs of EFB. Avoid feeding the swarm for at least 24 hours, so that any contaminated  honey in their stomachs will be used to produce wax and there is some chance the EFB may be ‘sealed in’ to the comb rather than the honey being stored for food.

We were also told that the main culprit for spreading AFB and EFB is us – the beekeeper. Visiting other beekeepers, buying bees, moving bees about – it all has potential to spread disease. Wash your bee suit regularly and use disposable gloves, not leather gloves. Hive tools should be cleaned using a washing soda solution.

It was good to see the samples and smell the foul brood frames close up, as the last time I’ve ever seen foul brood was on a similar bee health day. Some people thought they smelt…well, foul, whereas to me they just smelt a bit musty.

It was a good day – nice to be around ‘bee people’!